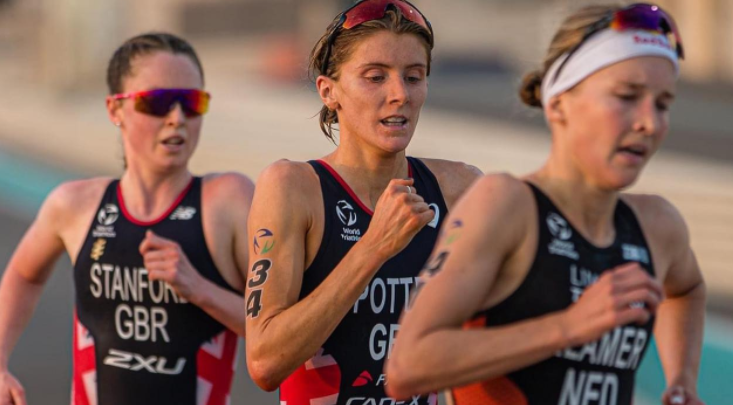 Beth Potter is a runner-turned-triathlete who has competed in long-distance running and triathlon. She competed for Great Britain at the 2016 summer Olympics in Rio De Janeiro and became the 2019 Triathlon European Champion. And to top it all off, she recently ran the second-fastest road, 5K.

Beth Potter was born on December 27 and 1991, in Scotland. From an early age, running was a part of Beth’s life. Her father is a runner, and her sister is a renowned running coach. She was also a great swimmer. At a very young age, she was a passionate swimmer and won prizes in this field as one of the best swimmers in Scotland.

She started her career as a runner in 2004 and got remarkable success in 2008 and won a 1500m track race in the Scottish U15 championships. Followed an injury, Beth made her comeback at the 5000-meter distance at the U23 European championships placing 16th.

Later, in 2014 she again got remarkable success at Glasgow in Scotland, where the biggest race competition was conducted, and she got 5th position for 10,000 m distance race impressively.

In 2017 Beth won the 10,000 meters race at British trials, which propelled her into her triathlon career.

At the start of 2017, she finally joined a triathlon career and joined different coaches and training, including Alistair Brownlee, Jonathan Brownlee, and Vicky Holland. Later, she won the 2017 elite competition at Cardiff Triathlon.

What is next for Beth Potter?

In a recent video, Beth said: “At the end of the 2021 season, I did find that the bike was the biggest area of improvement.” During the winter, Beth has been working hard on her bike: “We had to tick all four boxes during the winter. The Tactical sense, The technical and the overall bike conditionings or strengths, and developing top-end power stuff.”

But what race will be the first of Beth focus on in 2022? In another video, she said: “I was planning on racing in February (2022), but I don’t want to put unnecessary pressure on myself and rush it. I’m looking to put in a bigger training blog and then maybe Super League.” In an interview by Runnersworld, Beth also said: “My next focus is the Super League Arena Games in Rotterdam, so I’m going to do that and reassess.” So we’re looking forward to that!

Here is how to follow Beth Potter’s triathlon journey.