Ironman: What is it? And what does it take? 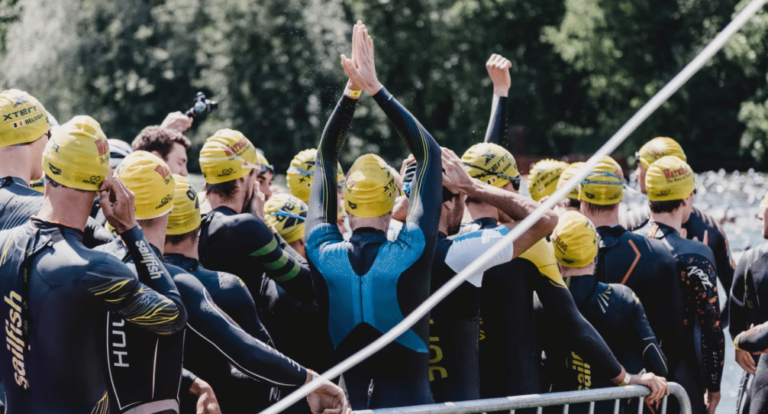 An ‘Ironman’ is a specific distance within the sport of triathlon. Triathlon is a sport that mixes swimming, cycling, and running followed by each other – and most often in that sequence.

The distance in triathlon races can vary greatly. But the holy grail is the Ironman distance, consisting of a 3.8 km swim, 180 km cycling, and a 42.2 km run, in that order.

The three disciplines in an Ironman

The name triathlon has a Greek origin, from treis (three) and athlos (competition). As mentioned, it’s a multisport case consisting of swimming, cycling, and running. However, two other disciplines are involved in a triathlon – nutrition, and mastery of transitioning.

Swimming during a triathlon is done in a swimming pool or in ‘open water,’ meaning in the ocean or lake.

Because of the distance and number of athletes participating, swimming in the Ironman distances is typically done in a lake or ocean.

If it’s an open-water event, you’re allowed to wear a wetsuit, depending on the temperature of the water.

Ironman wetsuit rules are further explained in this post by Deboer.

What equipment do you need for triathlon swimming?

Cycling is the discipline in an Ironman that usually takes the longest time to complete.

In an official Ironman race, drafting rules apply. Simply put, it means that you cant stay close to another athlete during the bike course to take advantage of the reduced wind resistance. Usually, it’s between 10 – 12 meters.

If you do draft, it’s usually a 5 minute time penalty.

What equipment do you need for triathlon cycling?

The running section of an Ironman is usually the most challenging part of the race. It’s said that an Ironman race begins at the last part of the marathon. But with pacing, discipline, and a good feeling strategy, everyone gets through it.

What equipment do you need for triathlon running?

The fourth discipline: Nutrition during an Ironman

Competing in endurance events that can last up to 17 hours requires a well-developed plan. It’s estimated you burn over 8000 calories during the race day. If these calories aren’t replenished, it will be close to impossible to reach the finish line!

As a rule of thumb, athletes should eat 60-90 grams of carbohydrates per hour during ironman events.

It’s also critical to have a good hydrating strategy. You’re going to swear a lot, and you’re going to sweat out electrolytes essential for an optimal functioning body. You should test everything in training. But a good rule of thumb is between 500 -1000 mg per hour.

This video gives a good perspective on Ironman nutrition tips:

T1 is transitioning from swimming gear to bike gear. After you’ve completed the swim, you’ll have to find your cycling bag and run to the changing area. There will be a regular changing section and a tent for a nude change. After you’ve changed, you put all the swimming gear in the back bag, drop it off in a container, find your bike, and then hit the road!

It’s quite an artform mastering the transitioning zone, and a lot of time can be spared. Lion Sanders, a professional triathlete, completed T1 in Copenhagen Ironman in 2 minutes and 25 seconds. It took me 9 minutes and 14 seconds.

Why? I had given the little transitioning thought during the swim. I was laser-focused. However, it also meant that I made a lot of mistakes. I had a hard time taking off my wetsuit and putting on all my cycling cloth standing up. All the seats in the changing tent were taken, and I’ve never changed in such a hurry, making it quite chaotic and inefficient.

Ask yourself the following questions when you conceive a plan for T1.

T2 is transitioning from cycling gear to running gear. The process goes like this: You hand over your bike to a volunteer, run (or walk) to your changing bag, find your bag, find a designated changing area, change into running gear, and then hit the road!

Running in your cycling gear, or better yet, wearing a tri-suit will cut a lot of time off the transitioning.

Ask yourself the following questions when you conceive a plan for T2.

Athletes who cannot consume nutrition from the aid stations due to allergies could use it for their nutrition. Others just use it for some dry socks.

This video by Matt LeGrand gives a good insight into transition strategy and how to pack your transitioning bags.

How long does an ironman take?

The average time is 12 hours and 35 minutes.

The time varies and is obviously dependent on the fitness levels. Still, the average times can also vary from Ironman event to Ironman event. The most significant factor is the altitude meters athletes have to fight through in the race.

The wind and temperature also matter – and it changes from year to year.

Are you considering making an Ironman yourself?

Suppose you are considering starting your own Ironman adventure. In that case, it is strongly recommended that you try one of the other distances first. The Ironman distance is long, and it typically requires a year of intense training.

However, i would advice you to attempt shorter distances first.

You have to swim long distances and start with hundreds of others simultaneously. If you do not have experience from smaller races, it can seem very overwhelming. Some even panic.

In addition, the change from wetsuit to cycling clothes after an hour in the water can seem chaotic. I was pretty crazy when I got up. My head was dizzy, and with adrenaline pumping, it was pretty messy trying to find a changing bag amongst 2000 others. I was glad I’ve tried it before. Because I could tell myself to relax instead of giving in to fear.

I felt that a 4: 18: 4 and the Olympic race was enough for me. But of course, you have to judge for yourself.

But I can tell you this. The Ironmen and women I shared the start and finish line with came in all shapes and forms. It surprised me to see heavy men and older women sharing the course with me. But I quickly learned that an Ironman is less about physical strength and much more about mental strength.

Sure, the long training session you do prepares your body for the physical demands. But when you train and push your limits, you strengthen your mind. And when you have NOTHING left 10 miles into the marathon, it’s not your physical body that is driving you forward, but your mind.
And that’s why everyone can do an Ironman. It’s a test of mental strength. Physical strength only determines how fast you complete it.

Is it worth it? Hell yeah.

What does a Ironman cost?

The Ironman ticker and gear for my Ironman race in august 2021 set me back 4.000 USD in total.

Obviously, you can spend a lot more on gear. The professional Ironman athletes, such as Lionel Sanders and Jan Frodeno, are rocking 16.000 USD Canyon bikes.

The other triathlon distances

As I said, there are several different distances within triathlon. You will typically encounter these:

According to Scott Stanley, the author of several triathlon books, triathlon began in the 1920s in France. A race called ” Les Trois Sports” is the first known rum, bike swims without any break in between.

The first event called “triathlon” was held at Mission Bay, California, in 1974, sponsored by the San Diego Track Club. 46 athletes participated that year, and it was reportedly the first triathlon race in the US.

An idea sprouted in both of their minds, and they famously said to each other: ” If you do it, I’ll do it. Whoever finishes first, we’ll call the Iron Man”.

On February 18, 1978, the first Ironman was held in Hawai’i. Two years later it was filmed by ABC. Four years later, ABC captured the incredible video clip of Julie Moss collapsing, crawling across it to get the finish. The video clip from 1982 fueled the fire of many future Ironmen and women in the years to come.