Triathlete Breakdown: Who is Kristian Blummenfelt? 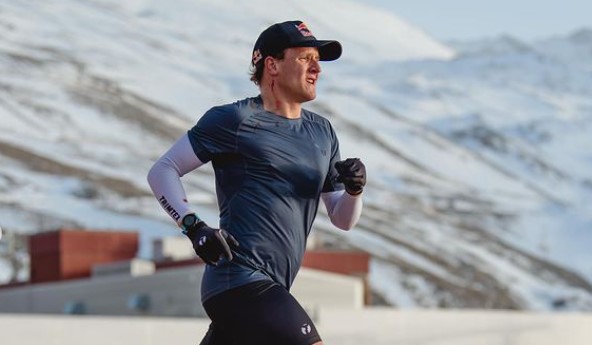 Kristian Blummenfelt is a Norwegian triathlete born on February 14, 1994, in Oslo, Norway.

He competed for and won the gold medal in the men’s triathlon at the 2020 Summer Olympics in Tokyo, Japan. Won the 2021 World Triathlon Championship Series races. AND (hold your hats) set a new world record in the Ironman Distance.

His third victory at the Ironman 70.3 Middle East Championships in Bahrain in as many years marked his third triumph overall in the event. Most impressively, he holds the world record for the 140.6-mile course with a time of 7:21:12 set at Ironman Cozumel in 2021.

The new world record is a milestone in his dream of completing an ironman in less than 7 hours.

“Our confidence is high as we prepare for the Sub7s, thanks to an outstanding debut performance by our recruit. With pacers, optimizing the course and tarmac, and an additional seven months of preparation, cutting another 22 minutes from the last time demonstrates that the Sub7 time is achievable.”

Here is an overview of Bluimmenfelts wins from the start of his career in 2017 to the present day:

Kristian Blummenfelt not only won his first Ironman race at Ironman Cozumel, but he also set a new world record. With a whopping time of 7 hours, 21 minutes, and 12 seconds.

Assisted by a favorable current, Blummenfelt finished second out of the 3.8-kilometer swim in a blazing 39:41 minutes. His transition time was very relaxed compared to his previous short course changeovers (1:52). He dropped to the sixth position to begin the 180-kilometer bike leg.

However, Blummenfelt steadily worked his way up the leaderboard by the halfway point of the bike leg. Despite this, he still had something left in him, returning to transition in 4:02:40, which gave him an eight-minute advantage over the rest of the field.

When it came to the final marathon, Blummenfelt was a man on a mission, finishing in 2:35 minutes overall. By the time he broke the tape, he had won and established himself as a serious candidate for the upcoming Ironman World Championship and the Phoenix Sub7 next year. He hopes to go under seven hours over the total distance.

He commented, “That was my first Ironman completed and completed successfully! It was a fantastic learning experience. I had hoped for a day like this: good swim conditions, surprisingly good bike conditions, and a pleasant day overall. The entire backside of the island had been buffeted by a strong headwind all week leading up to the race. Still, it eventually died down, and I enjoyed a nice tailwind. My bike leg took me entirely by surprise.”

Jan Frodeno distinguished himself as the best Ironman athlete of all time.

Jan Frodeno and Lionel Sanders went head to head in a two-person ironman race in Germany on a rainy day. Despite the wet conditions, Jan set a new world record at 7:27:53. Lionel finished at 7:43:32.

Kristian Blummentfelt as a track running

While competing as a track runner for Fana IL and TIF Viking, he also represented his country in the 2011 European Cross Country Championships. He finished third in the junior race. At the 2015 European Championships, he won a bronze medal in the triathlon. At the 2016 Olympics, he came in 13th.

Kristian Blummentfelt as a swimmer

In the ITU World Team Swimming Championships in 2017, Blummenfelt earned three silver medals, one bronze medal, and one DNF. Blummenfelt finished the 2017 season in third place overall in the World Touring Series, marking his highest finish in the sport to date.

Kristian blummenfelt and his coach

When Kristian Blummenfelt won the Olympic and World triathlon championships in the same year in 2021, he became history’s first male triathlete of his type.

As a result of a decade-long effort, Kristian and his coach Arild Tveiten won gold in the men’s skeleton in Tokyo 2020. In 2021, he had the best season of his career, beginning with a stunning triumph at WTCS Yokohama and ending with the Championship Finals gold in Edmonton, with the victory in Tokyo sandwiched in between.

Kristian began to consistently place on the podium as early as 2017, earning a silver medal at the Rotterdam World Triathlon Series Grand Final in the process. In 2018, he finished second in the first World Triathlon Series Bermuda, capping a spectacular podium sweep for Norway that highlighted the great success that the sport has made in the country.

Their confidence has grown since then, and with his spectacular Championship Finals gold in Lausanne in 2019, he has not looked back since. Highlights of his career include being crowned Olympic champion in Tokyo in 2020 and World triathlon champion in 2021. The winner of the World Triathlon Yokohama in 2021 and the World Triathlon Championship Finals in Edmonton in 2021.

It’s said that Blumenfeld works out for up to eight hours a day, swimming 45 kilometers, cycling 400 kilometers, and jogging 120 kilometers every week. He also does a lot of strength training.