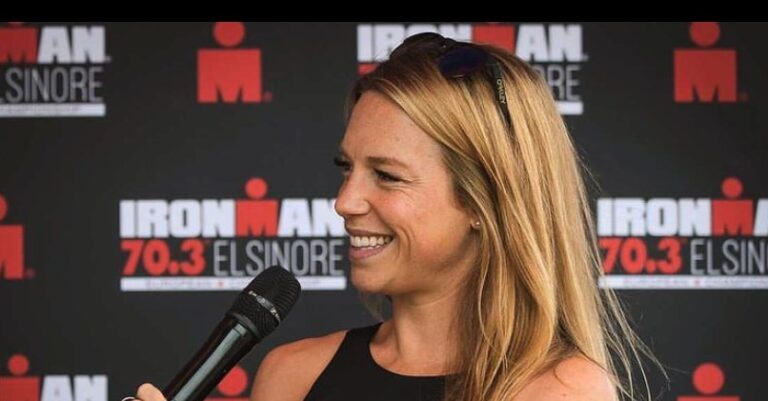 Holly Lawrence is a professional triathlete from Great Britain. If you follow the triathlon championships, you must know about her. Holly is one of the best triathletes, and she has overcome many difficulties to get where she is today.

If you want to know more about Holly, you are in the right place. Here is a detailed breakdown of the one and only Holly Lawrence!

Who Is Holly Lawrence?

Holly Lawrence was born in wales. She is an Ironman Champion and has won many other races. However, Holly is now in the USA. Her training takes place in California, where she prepares herself to take on the next triathlon challenge.

Many people don’t know this, but a doctor told Holly Lawrence that she would never run again due to a cracked navicular bone. As a triathlete, that is probably the worst thing to hear. However, that did not stop her. On the contrary, it only made her stronger, and she came back with a bang to take the win at Ironman 70.3 Asia Pacific Championship in Vietnam.

How Old Is Holly Lawrence?

Holly Lawrence is 32 years old, as she was born on 25th February 1990. Holly is a fraternal triplet, and her nationality is Wales. Of course, now, she is living in the United States, where she trains for all her competitions.

She began competing in the United Kingdom when she was only seventeen or eighteen years. That is because becoming a triathlete was her passion, and she has pursued this goal ever since she was a teenager. Her career speaks for herself.

As you can see, Holly Lawrence, a triathlete, has had an entire career, and she has won many triathlons during her career. During the 2106 Ironman 70.3 World Championship, Lawrence finished with a time of four hours, nine minutes, and eleven seconds.

In the same year, she also won three other Ironman events, including the one that took place in Beijing. Besides that, she came second during the 2019 Ironman championship. In 2017, Holly Lawrence also signed up for the Trek Factory Racing triathlon team.

Lawrence keeps herself busy with training so that she can take part in all such triathlon events. She has made a name for herself in the triathlon championships in no time.

Holly Lawrence triathlete cracked her navicular bone. That is a bone that is situated near the foot’s arch. The injury occurred when she was training in Santa Monica and got into a bike crash in 2017.

However, she still continued racing, even though she was in pain. After that, in 2018, she was running a half marathon and crossed the finish line in second. Lawrence could not come to the awards ceremony because her foot hurt badly, and she could not walk at all.

She was in denial for three days as she could not come to terms that her foot was injured. As she got medical help and got X-rays done, one of the doctors told her that she would never be able to run again. However, another doctor told her to get surgery and rest for sixteen weeks.

So, Holly went with the latter option and got the surgery done on her foot because the thought of not running again was nothing less than horrifying for her. Finally, Holly Lawrence triathlete got back on her feet through rest, physiotherapy, and other techniques.

If you want to understand Holly Lawrence triathlete further, you must understand what she says. After all, we can understand a lot about people through what they say and do. Who knows, some of these quotes might also inspire you to take a journey you are passionate about.

Some of the top Holly Lawrence quotes include:

“You work so hard on your physical body, it is crazy not to work on your mental side. You are missing such a big part!” (Twitter)

“With the training demands of triathlon, recovery is crucial.” (Twitter)

As you can see, Holly Lawrence’s triathlete focuses on the physical body, mental state, and recovery time. These elements are important in becoming an athlete or fulfilling any of the goals that you would like. You must have all these elements if you want to gain success.

That is why you can learn from Holly Lawrence and apply these lessons to your daily life. It will help you become a well-rounded individual in no time. Once you do, you will have the drive to fulfill all your passions.

That was a complete athlete breakdown to know more about Holly Lawrence triathlete. We tend to think that our idols are perfect, but even they go through ups and downs in life that make them stronger. The key is to stay strong in turbulent times and know that it will get better.

Lawrence has been an exceptional triathlete, and she keeps breaking boundaries for women in sports. Her life is an example that you can always succeed if you find the way no matter how hard times get. So, be sure to heed what Lawrence has to stay and use her as motivation to fulfill your goals.